How to Create Guiding Principles for Your Organization’s Success

Every organization and every team within each organization has a culture, although it may not necessarily be one that was created intentionally. As a leader, is yours the type of culture you want? If not, how can you transform it?

What Are Guiding Principles?

Guiding Principles are moral values that set a standard for behavior and attitude within a workplace. Companies establish Guiding Principles to shape the culture of their work environment and ensure that their employees understand what moral behavior they expect.

Along with mission, vision, and a strategic plan, culture is one of the foundational elements in an organization. Over the past two decades of coaching executive teams, I have found that leaders either believe fully in the power that culture has in the organization, or they feel it is overemphasized and that people should “just do the job they’re asked.” Part of the frustration from the latter group is that the organization has its core values documented and postered all over the office, yet people – especially leaders — don’t follow them.

As a leader and executive coach, I find culture to be crucial to team performance and success. We need only to look to well-documented and illustrated examples of amazing sports teams and their coaches, military units, and incredibly strong companies. In nearly all instances, their culture is prominent to their employees as well as the outside world. And they use it to attract incredible talent.

So how do you get there?

In my journey, there were two pivotal moments that shaped my approach to defining and developing a strong company culture. The first was in 2000, during the dot-com boom, when I was one of 3,500 employees sitting in a town hall meeting with our executive team. During the Q&A portion, one of my coworkers asked our CEO and president why executives were taking stock options from key suppliers, instead of applying those to the all-employee retirement plan. This had been well documented in a business ethics article in a well-respected magazine. The response from the CEO was “everyone’s doing it.”

That was the day that company died, as the morale plummeted and people, including myself, stopped working day and night to beat our competitors. Within a couple of years, that company disappeared. I learned from that situation how culture must be walked, talked, and lived at all levels in the organization—but most especially by the leaders.

The second defining moment was in 2010, as I read the book The Gamble by Thomas Ricks, in which he chronicles the war in Iraq in the early- to mid-2000s. The U.S. military was clearly losing ground across the country to al Qaeda, as well as insurgents within the population. This led to Generals David Petraeus and Ray Odierno’s transformation of the military culture and new strategy known as The Surge.

One of the key challenges they faced was how to change the mentality of our combat units from basing in the “Green Zone,” which was a metaphorical island within a sea of civil strife, to where they lived among the populace to stabilize neighborhoods and develop a sense of normalcy and safety.

They achieved this by implementing 10 Guiding Principles to which any service person could relate. My favorite to this day: “Secure the People Where They Sleep.” Whether you were on a patrol, working in the command center, or flying a mission, you could ask yourself if what you were doing supported that principle. It was powerful, as they removed commanders who failed to pursue these principles, and quickly changed the culture that ultimately led to the success of the strategy.

With teams, I apply the Guiding Principles approach over the Core Values for two reasons: 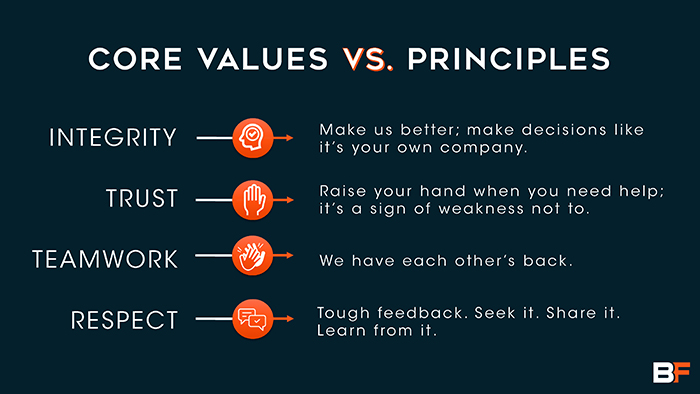 When you align employee behavior with Guiding Principles like these, you will see better employee engagement—and achieve better business results.